All my bags are packed, I'm ready to go …

I came out from the room in a bright, sunny morning. Dazzling blue sky was smiling with few patches of white clouds. Had this weather been present two days back, we could have seen a better color at Pangong. Whatever, bygone is bygone.

I came down to the tea restaurant in front of our home-stay. Met with Mr. Assad. The ever smiling face invited me to join him at the morning tea. I was introduced with two more young boys there – both were from Kerala, posted at Lakshadweep under Indian Navy. They were good in Hindi – so it didn’t take much time to befriend them.

Took few snaps of the morning in Khardung village. 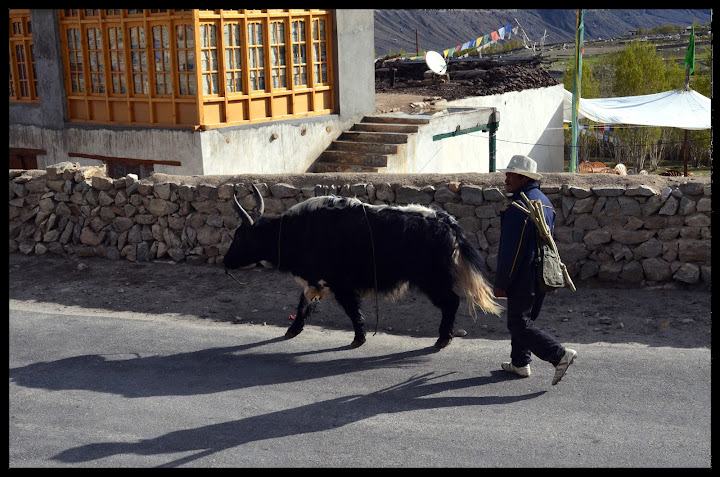 Some mountain bird – seen in flocks in Ladakh. 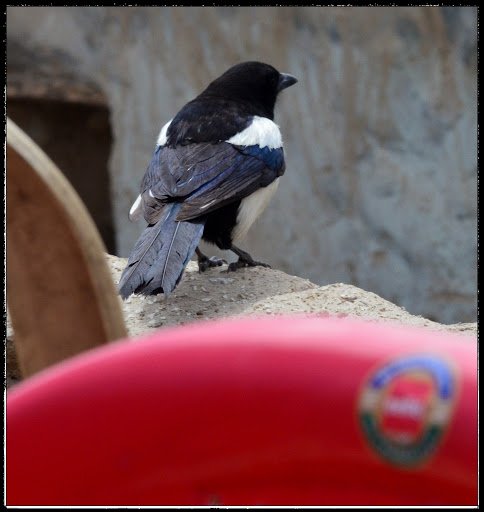 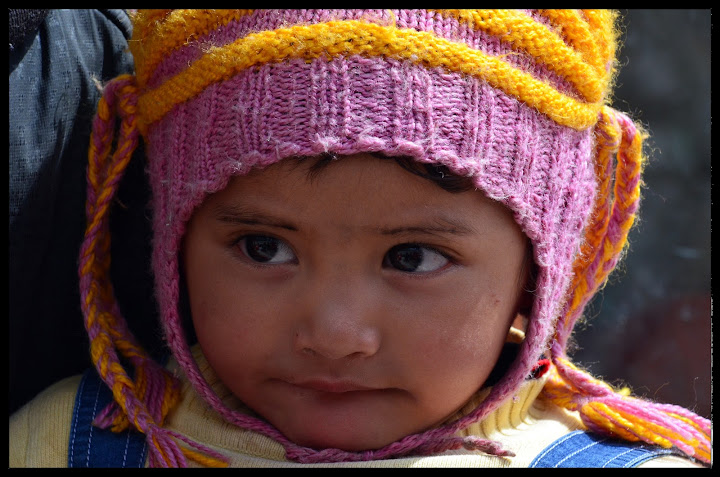 And the morning view. 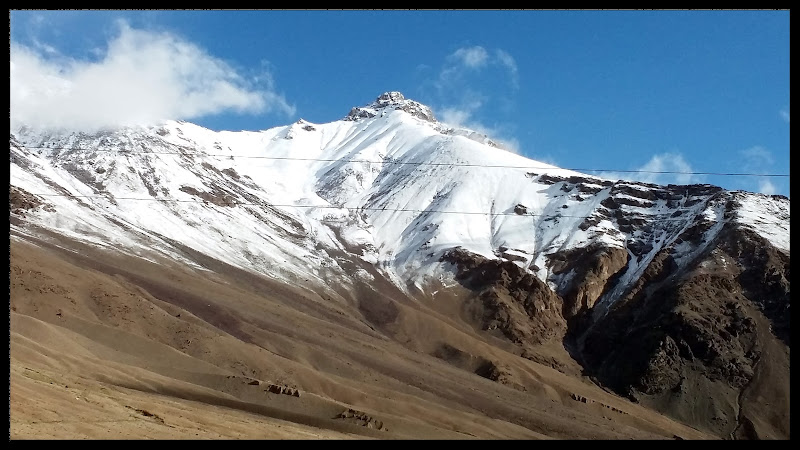 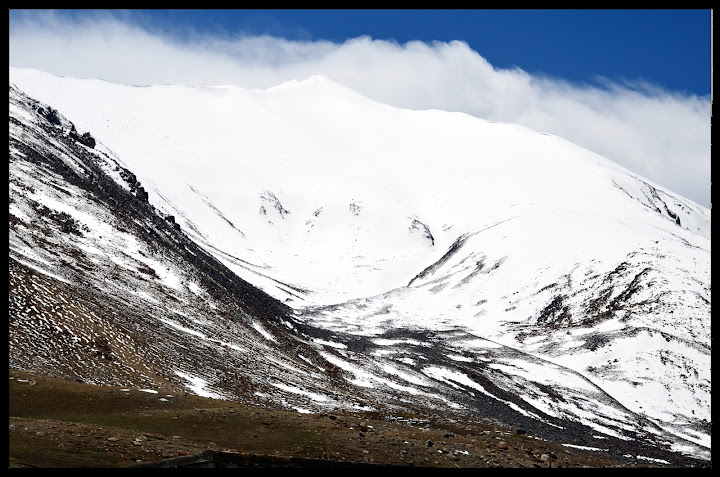 Choppers were circling around in the sky – Army’s routine job. They check throughout the day for any trapped or injured human being in this region.

Will Mr. Assad call the Colonel he met yesterday at Khardung La top? He said, he would call him after 10 am. Let’s enjoy the sun now. Anyway, first traffic would move from Leh to Nubra, we would move after that is cleared. There’s no point in calling the Colonel now.

That sounded logical. We spent time in chatting. We talked about Delhi, Kerala. Arun, the smiling Keralian shared his number, invited me to his house at Kochi.

The clock was moving slowly. At around 9:30 am we saw some Innova and Qualis coming down from Khardung La and moving towards Diskit – all full of tourists. That means Khardung La had opened at last.

Mr. Assad borrowed the mobile from the tea stall owner and called the Colonel. He also confirmed the news and asked us to reach North Pulu by 12:30 pm. Khardung La would open for us at 1 pm sharp. … The news left us in such an ecstasy, it can probably be compared with Captain Haddock’s reaction when he heard that Bianka Castafeore was leaving the Marlinspike Hall. I would finally touch Khardung La top on my bike – the final destination.

At around 10 am, I saw some bikers coming up from Nubra. The news had reached Nubra, so all the traffic were now assembling for their day’s journey. After three or four bikers’ groups passed us, I noticed two familiar bikes coming along – a Bullet, and an Avenger.

We became five again from three. In fact, we were seven – the Kerala boys were now accompanying us. Mr. Assad would drive his car with his bro-in-law. Gurdeep and Sumit shared their experiences. They didn’t go to Turtuk, instead they went to Panamik sector, welcomed by the Indian Army guys, and they were treated with Cashew, Almond, fruit juice. Finally they came back to Khalsar and spent the night there. They were overwhelmed by the hospitality of Indian Army (well, I had experienced the ultimate level of Army hospitality back in 2012, so I could easily understand their feelings).

At 11:30 we checked out from our home-stay and started for North Pulu. Vineet was again pleading for Diamox, I gave him two. Gurdeep whispered to me – “I suspect they would use Diamox instead of contraceptive pills, after they get married”.

We reached North Pulu shortly. A long, long queue had already been formed there. Few hundred trucks, cars and bikes were waiting. 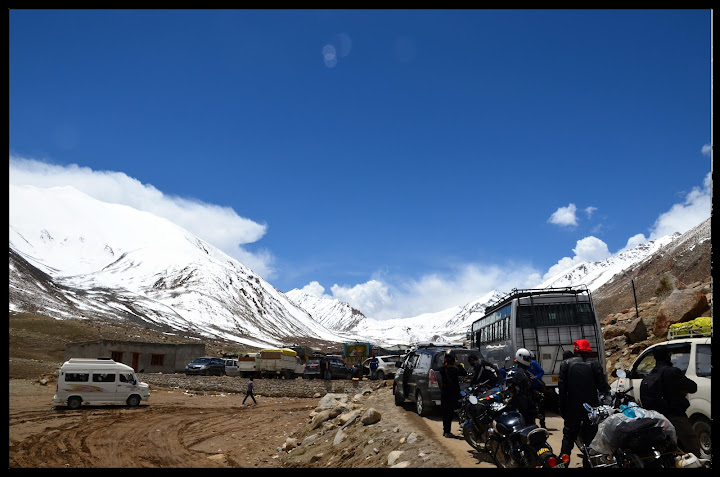 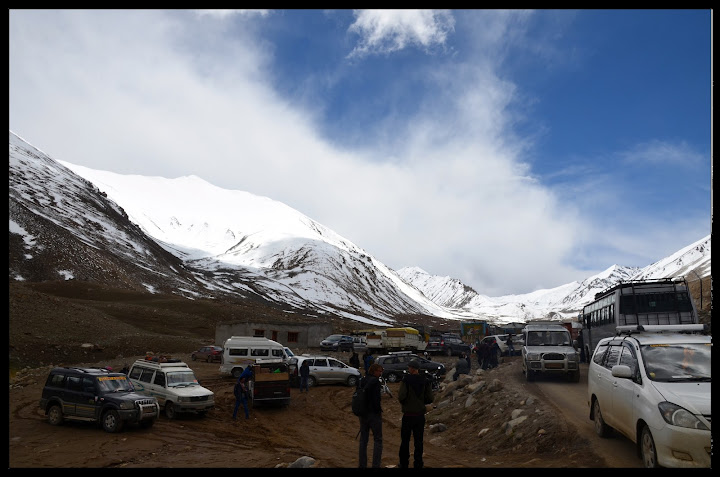 We made entry at the check post. It was like an international fair-ground – people from Delhi, Punjab, Russia, Venezuela, Austria were present there. We exchanged greetings, and chocolates.

Exactly at 1 pm the road opened for us. As per the standard rule, first the two wheelers would be released; then the four wheelers, and finally the heavy vehicles like trucks and tankers. So we started first.  The same broken roads, jerking and icy muds – it was more or less same experience as we had in Chang La pass, the only difference was, the Khardung La route had much more snow. After some time I realized the pain my bike engine was feeling in ascending, but it did not stop today.

The more I was ascending, the more snow was visible everywhere. I was running slowly and cautiously, after some time, even the soil ahead was covered by snow, I was moving my bike on the tire marks only. The Khardung La top was visible at a turn far away, and then it disappeared in the next turn. The breath was being heavy, I knew, it was due to lack of oxygen, so I continued breathing easily, not taking any chance to exaggerate myself.

But suddenly, I didn’t realized what happened, at a point, my bike skidded on hard ice, and in single moment it toppled and I was thrown out of my bike and landed at the heap of snow on the right side.

Yes, I was literally “thrown out” of my moving bike, but I actually landed in slow motion in a very, very soft cushion of ice, I was not hurt at all. The bike was lying at the other side of the narrow road. But I took no chance; I sat idle for few seconds, making sure my breathing rate does not increase. Oxygen is very, very scarce here.

Two drivers came out from the cars behind me, they helped me to lift the bike and put it in main stand, and helped me too, to stand up.

The bike engine was over heated – I could see light smoke coming out of the engine. I waited for a minute and then tried to start it. It started in first attempt – as if nothing happened. I just moved to first gear and the Khardung La top was in front of me. I fell down hardly hundred meters away from the top.

The Khardung La top was fully covered by snow. The wall that I saw last time was nowhere visible. Only the board could be seen above the snow. 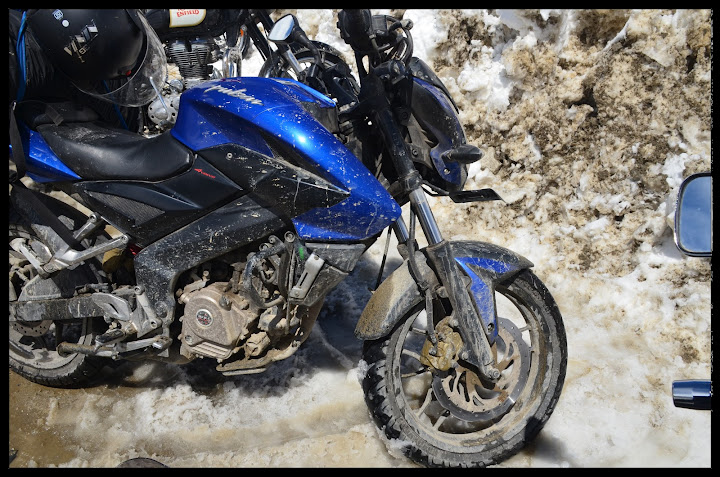 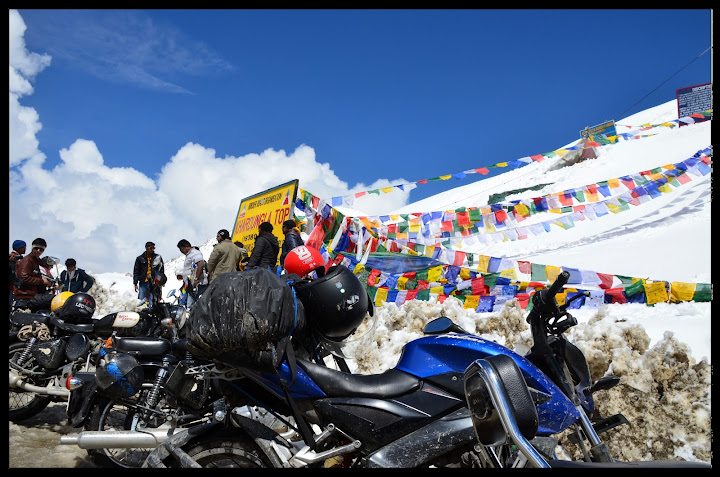 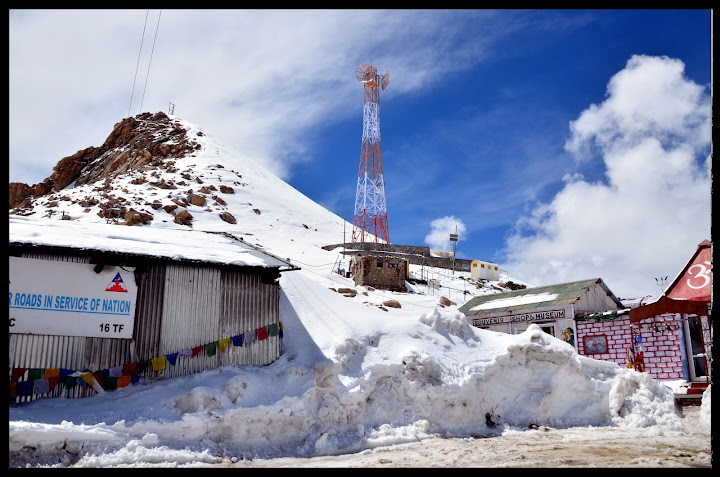 Preeti took a picture of me on my request. Ohh, I forgot to remove my balaclava. 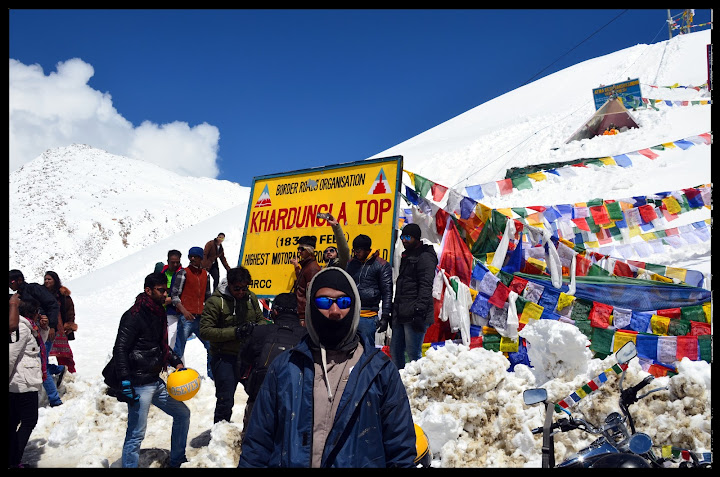 I thought of taking a small video, took out my mobile and saw 6 missed call alerts, two messages, and … and full signal. Airtel? At K-top? I forgot to take the video and called my wife and father from there. I was cut off from them for last two days. 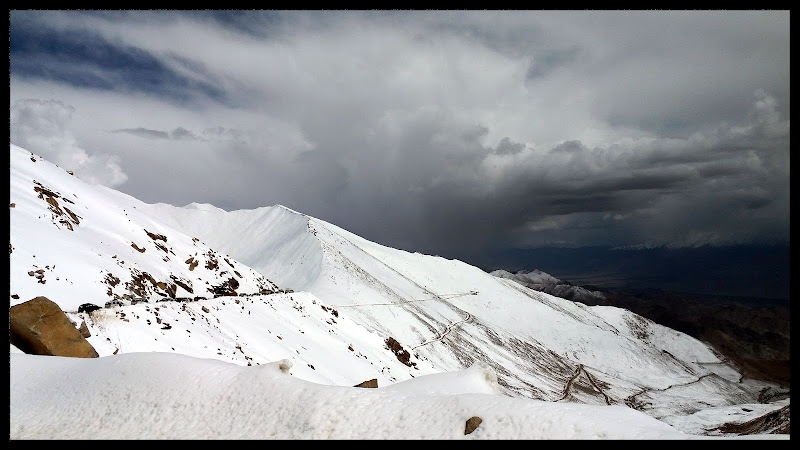 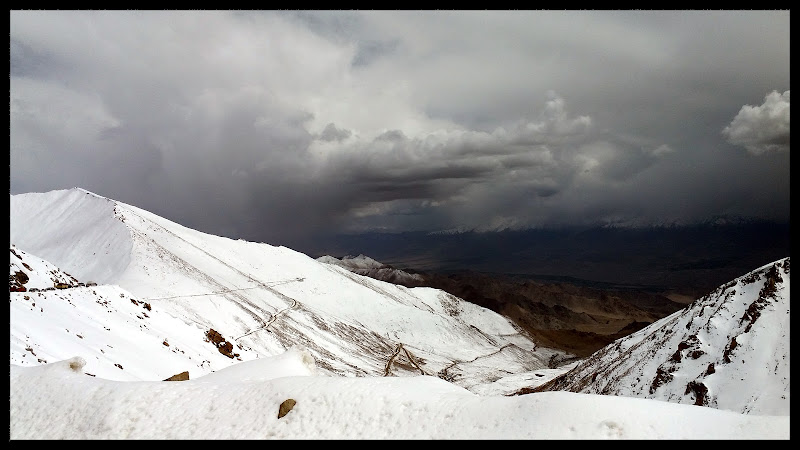 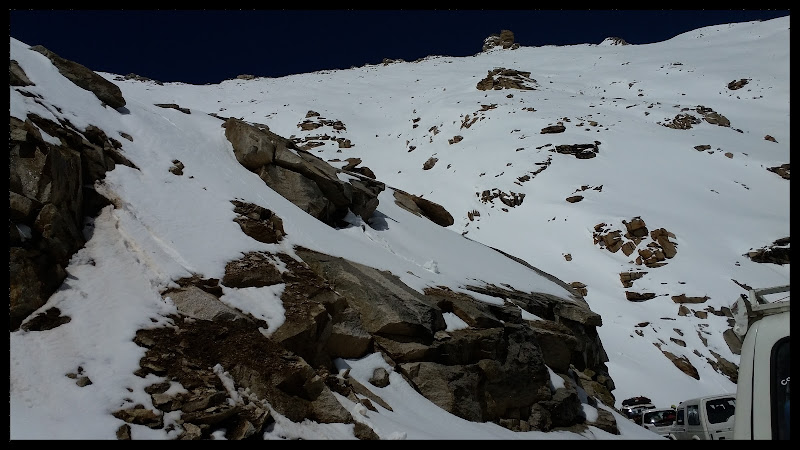 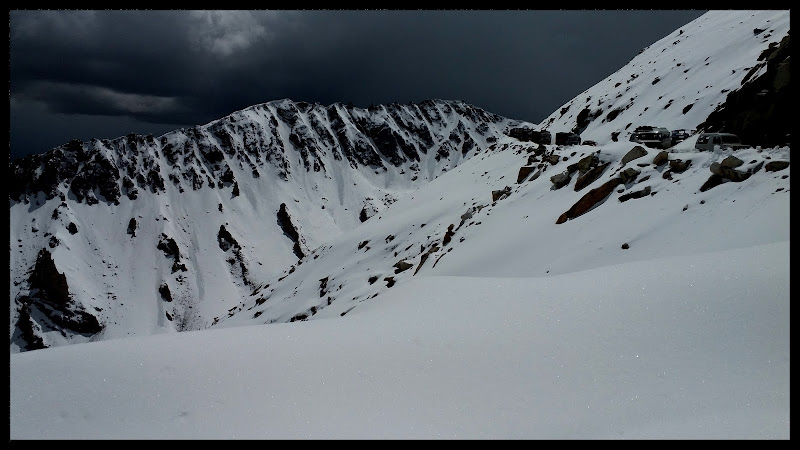 And then, descend from Khardung La top. Broken road led us till South Pulu, we stopped at a small tea stall for Army. We ordered coffee, tea and Maggie. Sumit was still not there, he reached after some time with a gloomy face. What happened? His bike’s shock-absorber was broken, he fell down once. The bike now could carry him till Leh, but it would not be possible to travel to Delhi in this condition. Sumit advised me to go ahead with Vineet and Preeti next morning. He would repair his bike and then start for Kargil. 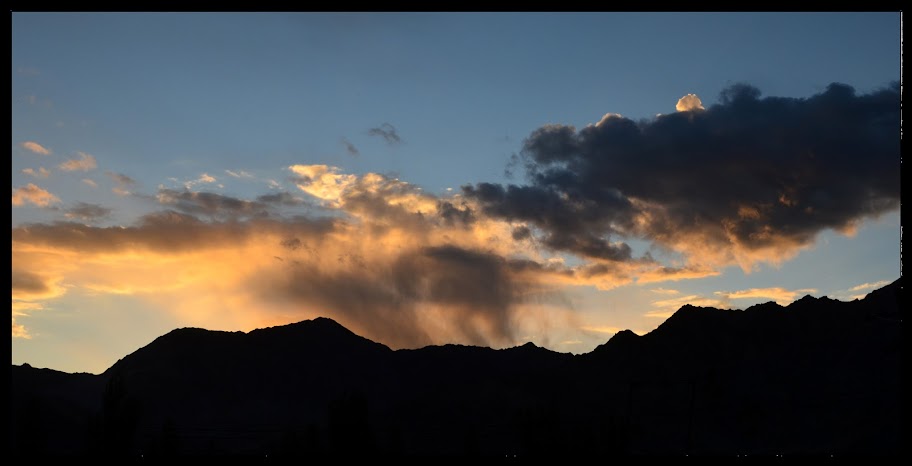 I had something going in my mind. We have been known to each other for quite few days now. We rode together, we pushed each other’s bikes, specially Gurdeep challenged his life to get my gloves in an extreme weather – and I was thinking about my own comfort? I was thinking about booking my bike in Cargo and take a flight back to Delhi just because I did not want to cover the same road again? … No, I can’t leave these souls until we reach Delhi. The road has introduced us; we should pay our gratitude back to the road, riding together.

It was again fine tarred road after South Pulu. Touched down Leh city at 5:30 pm. Checked in to the same GH of Mrs. Linda. After a brief rest, we went out for final shopping.

I bought a buff for myself, I had seen that piece of cloth before, but I did not realize its utility before. Sumit gifted one Ladakh flag each of us, for our bikes.  We also purchased the shock-absorber for his Avenger, but it was Sunday and all the mechanic shops were closed in Leh city. No way to try before tomorrow 9 am.

Vineet and Preeti would have to leave early next morning because they do not have much leave in hand – they need to reach Delhi in three days. So, we would not be able to meet them again. Even the Keralian boys would start early in morning tomorrow. Sumit insisted me, Sir, why would you be late because of me? You can go with them; and I’ll follow you with Gurdeep.

But my mind had been changed by then. I did not have any leave crunch. I would come back, with Sumit and Gurdeep only. I started alone, but now I do not feel secured without their presence. We have developed a strange relationship now. I told him, No worries for me. Even my bike needs servicing – I have to put Engine oil, I have to tighten the chain – we’ll start together, we’ll finish together.

Even Sumit would have to reach Delhi in three days, but he was helpless, until his bike was repaired, he could not go.

We had a grand dinner at night, at a Chinese restaurant.

Manali could not be covered this time. So we would come back again, next time. We promised to each other, we would hit the road again, together, soon – whenever time permits us.